Miriam Makeba was born in Johannesburg in 1932, during a time of economic depression. Her mother, a domestic worker, was imprisoned for six months for illegally brewing beer to help make ends meet, and Miriam went to prison with her as she was just 18 days old. 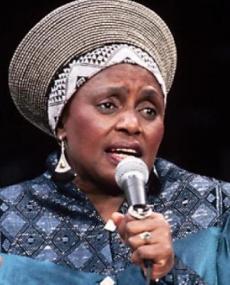 South African singer and human rights campaigner, Makeba was the first vocalist to put African music onto the international map in the 1960s. Makeba is well known throughout the world known as ‘Mama Africa’ and the ‘Empress of African Song’.

Makeba’s mother was also a sangoma, or a practitioner of herbal medicine, divination and counselling in traditional Zulu, Xhosa, Ndebele and Swazi (Nguni) societies of Southern Africa.

After her father died, Miriam was sent to live with her grandmother at a compound in Riverside, Pretoria. From a young age, Makeba loved to sing at church, and performed her first solo during the 1947 Royal Visit.

Miriam began her working life helping her mother clean houses. In the 1950s, she lived in Sophiatown when it was a vibrant place and one of the few areas where all races could mix.  It was the scene of kwela music, marabi and African jazz and big band music became popular.

Miriam Makeba began her music career singing for her cousin’s band, the Cuban Brothers, but it was only when she began to sing for the Manhattan Brothers in 1954 that she began to build a reputation. She toured South Africa, Zimbabwe (former Rhodesia) and the Congo with the band until 1957. After this Makeba sang for all-women group, the Skylarks, which combined jazz and traditional African melodies.

Makeba’s appearances in the films Come Back Africa (1957) and as the female lead in Todd Matshikiza’s King Kong (1959) cemented her reputation in the music industry both locally and abroad. She later married her King Kong co-star, Hugh Masekela, in 1964.

King Kong was about a boxer who kills his sweetheart and later dies in prison. The musical, publicised as a ‘jazz opera’, was a big success in South Africa. To avoid the apartheid laws that divided the public, the musical was often performed at universities.

For her small part in Come Back Africa (as a ‘shebeen’ singer singing the titles ‘Lakutshon Ilanga’ and ‘Saduva’), Makeba was flown to the Venice film festival in 1959 so that she could personally receive an award for the movie. The film was a documentary on South Africa made by an American film director, Lionel Togosin.

Makeba was soon in trouble with the South African authorities, who had received negative attention through the presentation of the film. Therefore, Makeba decided not to return to South Africa from where she got little or nothing in terms of payment for her performances.

The South African government then revoked her passport and denied her the possibility of returning to South Africa. She was the first black musician to leave South Africa on account of apartheid, and over the years many others would follow her.

Makeba took up refuge in London after the Venice film festival and met Harry Belafonte, who helped her to immigrate to the USA. In the early 1960s, she shot to fame in the USA overnight, and performed for former US President John F. Kennedy at Madison Square Garden in 1962. Among her other admirers were Marlon Brando, Bette Davis, Nina Simone and Miles Davis.

“I see other black women imitate my style, which is no style at all, but just letting our hair be itself. They call it the Afro Look.”

In 1960, when she tried to return to South Africa for her mother’s funeral, she discovered that her passport had been revoked.  In 1963, she testified about apartheid at the United Nations and her South African citizenship was taken away from her.  She lived in the US thereafter and her records were banned in South Africa.

In 1966, she won a Grammy award for An Evening with Harry Belafonte in 1965. She was also the first black woman to have a Top-Ten worldwide hit with Pata Pata in 1967. In total, she recorded four albums in the USA. It was in the United States that she also recorded her famous Qogothwane (The “Click” Song).

In 1968, she married militant African-American civil rights activist and Black Panther leader Stokely Carmichael but harassment from the US government and forced to move to Guineau. They separated in 1978.

After moving to Guinea, Makeba managed to find work outside the USA. She toured Europe, South America and Africa in the 1970s and 1980s. During these years she performed mostly in trade union halls, cultural institutions and on other small stages. She also appeared at jazz festivals like the Montreux in Berlin.

It was during this period that Makeba addressed the United Nations’ General Assembly twice, speaking out against apartheid as a Guinean delegate to the United Nations (UN). In 1986, she was awarded the Dag Hammerskjold Peace Prize from the Diplomatic Academy for Peace.

According to her biography, the 1980s were a difficult time for Makeba, as she separated from Carmichael and her daughter, Bongi, died in tragic circumstances. She also battled with alcohol abuse and cervical cancer during this period.

In 1987, she joined American folk singer Paul Simon’s highly successful Graceland tour to newly independent Zimbabwe. The concert featured multicultural sounds and drew attention to racist policies still prevalent in South Africa, despite the fact that it technically violated the cultural boycott of South Africa. After Graceland, Miriam was in great demand, and went on to perform for heads of state, and even the Pope.

In 1990, ANC leader Nelson Mandela was freed from 27 years in prison, and encouraged Miriam Makeba to return to South Africa.  She then returned, after 31 years in exile, and became a goodwill ambassador for South Africa to the United Nations.

After her return to South Africa, Makeba struggled to find collaborators, but six years later she produced the album “Homecoming”. In 1997, she embarked on her Farewell Tour and appeared in the movie Mama by Veronique Patte Doumbe.

In 1998 she toured Africa, the USA and Europe and sold out theatres. In 2002, Makeba starred in Lee Hirsch’s opulent and exciting documentary Amandla about the powerful part of music in the struggle against apartheid.

Makeba has received honorary doctorates from both local and international academic institutions. The city of Berkeley proclaimed the 16 June to be Miriam Makeba Day and she has received the highest decoration from Tunisia. In 1999, Nelson Mandela presented her with the Presidential Award (see awards for more).

In 2005, Makeba announced her retirement for the mainstream music industry but she continued to make appearances and to do smaller performances.

Throughout her career Makeba insisted that her music was not consciously political in an interview with the British times she said:

Makeba continued her humanitarian work through her Zenzile Miriam Makeba Foundation, including the Miriam Makeba Rehabilitation Centre for abused girls. She also supported campaigns against drug abuse and HIV/Aids awareness. Furthermore she appeared as President Mbeki’s Goodwill Ambassador to the UN.

Makeba died in 2008, at the age 76, after having a of a heart attack after a 30 minute performance at a concert for Roberto Saviano near the southern Italian town of Caserta.

“I kept my culture. I kept the music of my roots. Through my music I became this voice and image of Africa and the people without even realising,” – quote by Miriam Makeba written in her biography (2004)

Note: A sangoma is a practitioner of herbal medicine, divination and counselling in traditional Nguni (Zulu, Xhosa, Ndebele and Swazi) societies of Southern Africa.

Lyricsadmin - April 30, 2020
0
Teni the Entertainer has always given us great vibes. The singer, who is also Niniola’s sister, is a well recognized singer in the country,...

How Burna Boy won heart of Star to become ambassador.